skip to main | skip to sidebar

What comes to your mind when you hear/read that word? Blue Velvet (Freud in his essay "Fetishism" tracks back the use of "fur and velvet" as fetishes to the view of the hair on mons veneris)? Velvet Underground (shiny boots of leather)? Strange objects one can buy in sex-shops? Red shoes (Freud explains, that the curious glance of the boy looking for the female genitals often starts at the feet working its way up the legs)? Underwear? Freud explains that kind of fetishism by ways of contact and by the moment of undressing that reveals what the boy does not want to realise - that women have no penis. Fear of castration leads to fixation on the fetish as a substitute for the female penis. Fear of castration - in other words the fear of being nothing more than a woman with that ridiculous mini-penis called clitoris? That is why fetishes in Freuds opinion often have a form similar to that of the penis (the picture on the upper left shows Freud with a fetish-like object).
There is another sense in which we use the word "fetish". Cars, gadgets and other technical devices (like flat-screen TVs) that some (wo)men seem to have made at least to symbols of what they adore and venerate and strive for. 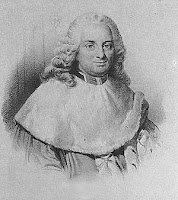 What does the sexual meaning of the word have in common with its usage in that context of everyday life? Obviously, in both cases unanimated objects are put in the place of (parts of) animated ones. In a way, this seems to be a reversion of what theorists of religion have called "animism", a theory that (from Tylor to Cognitive Science) explains religion as the mechanism of taking unanimated objects for animated ones. Animists then were people that assume animated agents, where there are none. Nietzsche holds, that that is the case in a preeminent way in indo-european languages and their tendency to build subjects of actions where there are only actions. Simply put, he explains why we cannot ask, what the wind is doing, when it is not blowing.
In the case of "fetishism" as related to sexuality, there are at least two steps involved: taking a part of the person(=woman) for the person herself and replacing it by an object related to it (so that the part of the woman being the normal goal of sexual activity is replaced by that very object). In the second case, we talk about people who "bow down to the work of their hands, to what their fingers have made" (Isaiah 2,8). Since the publication of Charles de Brosses' (on the upper right) "Du culte des dieux fétiches" in 1760, their has been some tendency in the study of religions to use the term "fetishism" for classifying (at least some of the) "primitive religions". Freud, in his essay on sexual aberrations ("Die sexuellen Abirrungen") introduces the word "fetishism" by noting the similarity of the sexual perversion he writes about with the practice of "uncivilised people" to adore their gods in the form of idols: "Dieser Ersatz wird nicht mit Unrecht mit dem Fetisch verglichen, in dem der Wilde seinen Gott verkörpert sieht".
Interestingly, in West Africa there are civilised people that call themselves fetishists (feticheurs). In Lomé we even find a marché des fétiches, a market of fetishes. The man working as a guide on that market readily explains, that the objects you can buy there are not fetishes. They are the basic elements that are used for medicines and objects that are called "bocio" in the Fon language. Here is a nice collection (photograph taken in 2007-09 in Lomé): 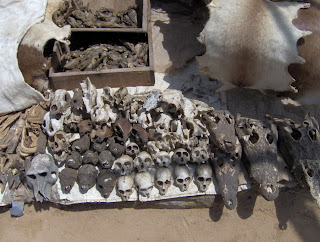 The meaning of bocio is: "the cadaver of the bo", "bo" being a word relating to the power active in the world that can be used to different goals by various practices. For example, the divinator is called bokono, which translates as the master of the knowledge of the bo. Bo is a similar concept to that of the Yorùbá ashé, and would best be labelled as "neutral mystical force" as Dianne Stewart has put it. A bocio as means of protection (a gourd or bottle filled with empowered substances or a carved object to which other objects like parts of animals, strings and the like are attached) does not work by simply being that object. It becomes empowered through ritual treatment, including being heated by saliva, peppers, sacrificial blood and the like. In the case of the talismans that are sold to tourists on the marché des fétiches, they are bespoken by a priest for the customer (using the latter's name), who has to do some simple ritual actions that establish a connection between him and the object. 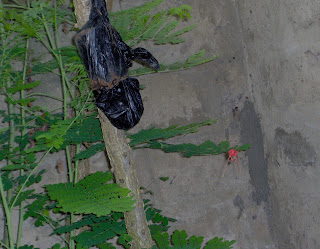 A protecting medicine (photograph taken in 2008-09 in Benin) 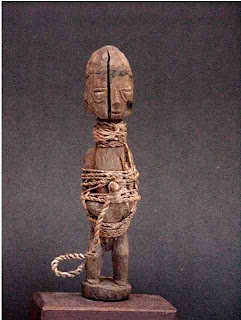 A bocio (not my photograph)
The concept of bocio is somehow similar to that of nkisi (pl.: minkisi) you find among peoples of congolese origin. These objects are used to focus power, f.e. by binding them, driving nails and other metal parts into them or attaching various materials to them. The hole in (the center of) the figure is used to place medicines there. In Berlin, the ethnographic museum has a collection of minkisi worth visting (although the way they are presented is not really apt to do away with European prejudices). 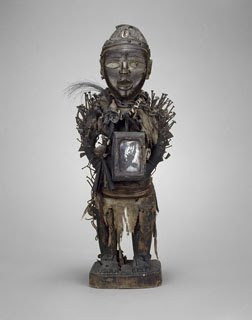 (not my photograph)
As people, who solve the problems of other people - protecting them, healing them, resolving their conflicts with others and the like - the "feticheurs" see themselves as "herbalists, healers and doctors in tradtional medicine": 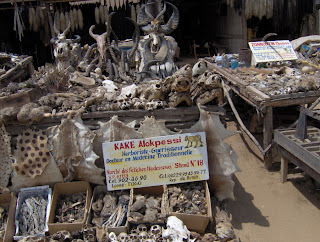 Now what about bowing down "to the work of their hands"? Freud, as Isaiah, is not talking about traditonal medicine. He is talking about veneration of unanimated objects, taken to be embodiments of the Gods. How do the objects we find on the altars of practitioners embody the gods? First, we have to explain, that this is not the only way the powers of the gods (orisha / vodun) are represented in society. The vodun have their mediums who receive them in possession trance. This is representation by incarnation or personification, as we can see on that clip I shot in Lomé in January 2009, that features a woman possessed by Sakpaté:

Obviously, this is not an unanimated object representing an animated one. It is also not likely to be an action interpreted as that of an animated agent, where there is none, because at least the representing agent is animated, even if there is no represented one. In that case it would be pure connotation without denotation, to put it in a semiotic way. In other words, what is represented, is not something you can translate (make understood) by pointing at it with the finger (= indicate). Although I agree, that people sometimes develop strange theories about things we cannot simply indicate (because they haven't understood the aristotelian distinction between substance and accident), I would not think, that all accidents we cannot simply point our finger at (and that, like all accidents cannot be conceived of as entities) do not exist. I would rather think of some of them (love, hate, will and the like) as the most powerful "agents" active in the world.
Be that as it may, my concluding (although not final) opinion on fetishism is, that the (religious) practices labeled as such deal exactly with the latter powers. The objects looked at as fetishes - a word derived from feitico, the portuguese word for amulets, things made by our own hands - are not incorporations of gods - they are objects focusing the powers of that gods. 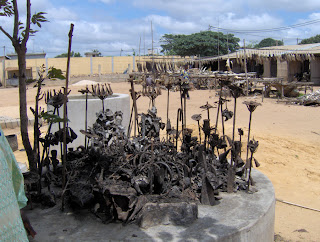 Marché des fetiches, Lomé, September 2007
The last picture featured shows a representation of Ogu, vodun of iron, warfare and related forces. Nobody could take this as a representation of the god in an anthropomorphistic way. This is simply a representation of the outcomes of his powers. Ogu is thought to be the primordeal agent possessing that forces - in a way, he is the focussing point of them. This "altar" for Ogu is also a focussing point - metonymical representations of his powers are a place of his/their presence, inasmuch as rituals provide interaction with them. The "fetish" is a representation of forces active in the world in exactly the same sense, that the "god" is - a made-up agent for powers that cannot be thought of as a substance (in the aristotelian sense of the word), but only as something adherent to one. As Judy Rosenthal (in her study of "Possession, Ecstasy & Law in Ewe Vodun", Charlottesville & London 1998) has remarked, the word "fetish" does not hold any pejorative meaning for the practicioners of Ewe Vodun, because they know they make their gods, in contradistinction to men made by their gods (1, 45). In a way, it seems that Freud has also thought of the objects he called "fetishes" as metonymical representations of power, or what he called drive (Trieb), respectively. Not finished, but ending here.
Gepostet von Gerald Hoedl unter 9:16 PM

In Lomé, Togo (from right to left)

What is it about?

Gerald Hoedl
Gloggnitz, Lower Austria, Austria
I am a teacher of Religious Studies at Vienna University and of Cultural Studies at Humboldt-University, Berlin.

My favourite places in WWW

SIMON, PASCALINE, THE PRIEST & ME